In 2005, Eadric Streona (Streona is not his real last name, rather a nickname assigned to him meaning ‘grasper’ or ‘acquisitor’), a little known man to most, was voted the worst Briton of the 11th century in a poll conducted by BBC History Magazine. And, to those who know of him, for good reason. The chronicler William of Malmsbury (1095-1143) had this to say about Eadric:

“This fellow was the refuse of mankind, the reproach of the English; an abandoned glutton, a cunning miscreant; who had become opulent, not by nobility, but by specious language and impudence. This artful dissembler, capable of feigning anything, was accustomed, by pretended fidelity, to scent out the king’s designs, that he might treacherously divulge them.”

Eadric was one of eight or more children, born to a father who worked at the court of King Aethelred Unraed. There is no evidence that Eadric’s father, Ethelric, held any titles or contributed to the court in any significant way. Eadric and many of his brothers followed in their father’s footsteps; their names are included as witnesses of many charters from Aethelred’s reign.

The first appearance of Eadric’s name on a charter is in 1002, where he stood as witness along with his father and brother. History suggests that Eadric was retained by Aethelred to perform the more distasteful tasks of rule, one of which was the murder in 1006 of a nobleman, Ealdorman Aelfhelm. (Aelfhelm was father to Aelfgifu of Northampton, who would later go on to marry Aethelred’s enemy Canute). Aelfhelm’s sons were blinded on Aethelred’s orders and although there is no evidence that Eadric performed this task it is likely, given his role in their father’s death, that he was at least present.

The following year Eadric was made Ealdorman of Mercia and it was around this time that he also married the king’s daughter, Eadgyth. Obviously Aethelred valued Eadric’s contribution to his reign.

It was a dangerous time for Aethelred and England: the country’s borders were weakly protected and England was a tempting prize for Danish invaders. After an invasion of the Danes in 1009, Aethelred was prepared to retaliate with force but was persuaded by Eadric to take a different course. Over the next two years the Danes ravished England and were only stopped by the payment of nearly 10,000 pounds of silver, an unpopular move negotiated and delivered by Eadric Streona.

Early in 1013 Sweyn Forkbeard attacked England and this time no amount of gold would be enough: Forkbeard wanted the crown. By the end of the year Aethelred, his wife Emma, their children, and Eadric had all fled to Emma’s home in Normandy. Sweyn died early the following year however and while Sweyn’s supporters declared his son Canute king, the royal counsel in the south of England asked Aethelred back. 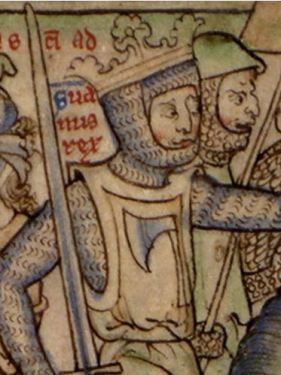 Eadric followed Aethelred and his family back from Normandy and once again set himself up as the king’s enforcer. One of his first acts was to punish two of the leading thegns from the Danelaw for their possible support of the invaders. Sigeforth and Morcar were tricked into attending a meeting where Eadric murdered them.

Canute arrived back in England a year later, having restocked supplies, ships, and men. By this time Aethelred was ill and his son by his first wife Edmund Ironside took control of the English army. Eadric had his own army and ships and for reasons unknown to history, betrayed his king and country to side with the invading Canute.

In April of 1016 Aethelred died and Edmund was nominated king by the London noblemen, despite more widespread support for Canute. The fighting continued, with Canute’s and Eadric’s armies stretching Edmund’s resources to breaking points. At the battle of Otford, John of Worcester writes that Edmund had the upper hand but Eadric, still fighting with Canute, cut the head off of a soldier who looked like Edmund, held it in the air and told the English that their leader was dead, an act which further sealed his reputation as worst Briton of the time. Eadric isn’t done however.

Late that same summer Eadric switched sides once again, swearing loyalty to Edmund. The Anglo-Saxon Chronicle’s comment on this act is revealing: “No greater folly was ever agreed to than this one.”

In October the final battle occurred and with it another of Eadric’s treacheries. Edmund should have won the Battle of Assandun; his forces were superior to the Danes and he had enlisted fresh fighters, compared to the Danish forces who were fewer in number and battle-weary. The fighting continued for hours, the sound of shield walls thundering could be heard in the next village. But at a pivotal moment, Eadric fled the battlefield, his many supporters along with him. The sides were now numbered in favour of the Danes and the English suffered a crushing defeat.

The Anglo-Saxon Chronicle’s record for the day of the battle: “Then Ealdorman Eadric did as he so often did before, first started the fight…and betrayed his royal lord and the whole nation.”

After the battle Edmund and Canute met and divided the country between them, with Canute ruling in the north and Edmund in the south. They agreed that if either died without issue then the other would take the entire country. Fortunately for Canute, Edmund died of battle injuries not long afterwards; Canute now ruled all of England.

Eadric ingratiated himself enough with the new king to remain Ealdorman of Mercia but by the following Christmas, 1017, the mood had changed: Canute either suspected Eadric of treason or had already accused him of such.

In the Encomium Emmae, Emma of Normandy’s account of events, Eadric’s death is noted:

“…One of these was Eadric, who had fled the war, and to whom, when he asked for a reward for this (ie aiding Canute at Assandun) from the king, pretending to have done it to ensure his victory, the king said sadly ‘shall you who have deceived your lord with guile, be capable of being true to me? I will return to you a worthy reward, but I do so to the end that deception may not subsequently be your pleasure’. And summoning Erik, his commander, he said ‘Pay this man what we owe him, that is to say, kill him lest he play us false.’ (Erik) indeed raised his axe without delay and cut of his head with a mighty blow…”

So does Eadric Streona deserve the title of worst 11th century Briton? It would seem so, for even the chroniclers of the time were horrified by his actions. As well as the earlier quote by William of Malmsbury, John of Worcester (died 1140) has this to say: “He was a man, indeed, of low origin but his smooth tongue gained him wealth and high rank, and, gifted with a subtle genius and persuasive eloquence, he surpassed all his contemporaries in malice and perfidy as well as in pride and cruelty.”

Read more about Eadric and how he meets his end in my novel The Northern Queen.