Recently on The History Channel’s Vikings, Bjorn Lothbrok (played by Alexander Ludwig) was attacked by a large man sent by his enemies to kill him. The man was a berserker, one of the legendary men who were mad/evil/magic/ugly/giant/trolls and impervious to weapons. But who were they? 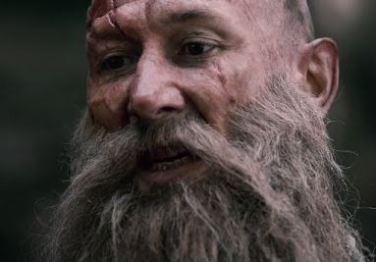 There are many mentions of berserkers in the sagas. Historian Snorri Sturluson believed the name ‘berserker’ came from the Norse ‘bare-sark’ or bare of shirt ie going into battle without arms. But a majority of the historians discount this and agree that the name means ‘bear-sark’, bear skin, perhaps one of the best-known features of the berserkers. Another name by which the berserkers are known is ‘ulfhedinn’ – wolf-coat.

Both bears and wolves are important animals to the god Odin, and it is believed that the berserkers were a cult of Odin who are said to have taken on qualities of the All-Father for themselves. One theory states that the name ‘Odin’ comes from the Gothic word ‘wods’ meaning ‘possessed’. Indeed the berserkers are described as being possessed when in battle. They also adopted Odin’s fury and his shape shifting abilities, along with a magical immunity to weapons. 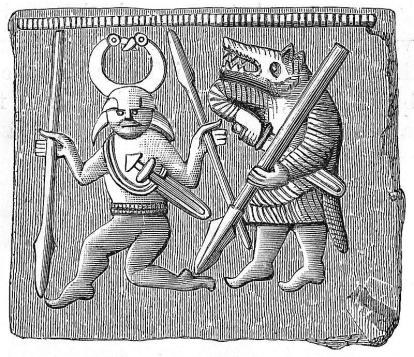 Helmet Plate from Torslunda Showing Odin and a Berserker (Wikipedia)

The madness of a berserker is described by Howard Faber in an article about the neurochemical effects of ‘going berserk’:

“This fury, which was called berserkergang, occurred not only in the heat of battle, but also during laborious work. Men who were thus seized performed things which otherwise seemed impossible for human power. This condition is said to have begun with shivering, chattering of the teeth, and chill in the body, and then the face swelled and changed its color. With this was connected a great hot-headedness, which at last gave over into a great rage, under which they howled as wild animals, bit the edge of their shields, and cut down everything they met without discriminating between friend or foe. When this condition ceased, a great dulling of the mind and feeble- ness followed, which could last for one or several days.”

Berserkers were described as huge men, often compared to trolls, and were hired by kings, sometimes acting as personal bodyguards.

In Hrólf’s Saga there is a description of the berserkers that King Halfdan’s retains:

“On these giants fell sometimes such a fury that they could not control themselves, but killed men or cattle, whatever came in their way and did not take care of itself. While this fury lasted they were afraid of nothing.”

These warriors would indeed have been an effective deterrent to any enemy on or off the battlefield.

Was it Really Madness?

There are many theories about what, exactly, caused the berserker’s madness and fury. Ingestion of a hallucinogenic mushroom, Amanita Muscaria, was suggested by a Swedish professor in 1784 but this theory has been largely discounted as there are no contemporary references to the practice. Consumption of large amounts of alcohol is another possible explanation. Other suggestions include mental illness, genetic differences and self-induced hysteria.

Once the fury had subsided the berserker was left exhausted, almost ill:

“What people say about shape-changers or those who go into berserk fits is this: that as long as they’re in the frenzy they’re so strong that nothing is too much for them, but as soon as they’re out of it they become much weaker than normal. That’s how it was with Kveldulfr; as soon as the frenzy left him he felt so worn out by the battle he’d been fighting, and grew so weak as a result of it all that he had to take to his bed”. (Egil’s Saga)

An ideal time to kill a berserker was immediately after they fell from exhaustion.

When not fighting for the king, berserkers were not respected. At all. They had no place in peaceful society and were considered nearly niðingr – lowest of all men. They had a reputation for being thugs, harassing villages and villagers alike.

Danish historian Saxo Grammaticus (1150 – 1220) mentions these bands of berserkers in his history of the Danes:

“The young warriors would harry and pillage the neighborhood, and frequently spilt great quantities of blood. They considered it manly and proper to devastate homes, cut down cattle, rifle everything and take away vast hauls of booty, burn to the ground houses they had sacked, and butcher men and women indiscriminately.”

Another activity these bands of berserkers engaged in was holmgang, a ritual duel fought to the death. When the berserker, who was probably larger and heavier, won the fight he would take the dead man’s possessions, including farm and land.

Egil’s Saga mentions one such incidence:

“There’s a man called Ljot, a berserker and duel-fighter, hated by everyone. He came here and asked to marry my daughter, but we gave him a short answer and said no to his offer. After that Ljot challenged my son Fridgeir to single combat, so he has to go and fight the duel tomorrow on the isle of Valdero.”

It was considered very bad form, a sign of cowardice, to refuse to duel when challenged, even if by a berserker of superior strength and speed.

In 1015 Earl Erik Haakonsson outlawed berserkers in Norway, along with the practice of holmsgana. This was the beginning of the end. In 1123 Icelandic law declared berserkers to be lesser outlaws, a crime carrying a penalty of a three year banishment. Anyone caught aiding the convicted in any way was given the same penalty.

Eventually the berserkers dissolved, integrating into society but leaving behind stories of their existence in the sagas.

“were as mad as dogs, bit their shields, and were as strong as bears or wild oxen…”

In the Lewis Chessman (the Twelfth Century chess set discovered in Lewis and housed in the British Museum) there is a rook showing a berserker biting his shield.

Rook from the Lewis Chessmen (Wikipedia)

There are vikings galore in my novel The Northern Queen. 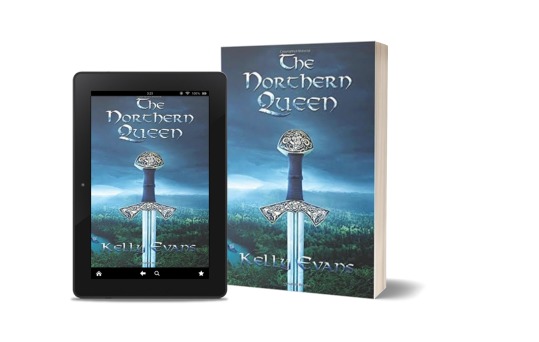