Gaby’s Ghosts is a Middle Grade ghost/mystery series suitable for all ages! Gaby Brown is a normal grade 5 girl who happens to have type one diabetes. Oh, and who also happens to see ghosts! Follow Gaby and her friends in each book as they face spirits from all times in history, decipher dreams, and collect clues. 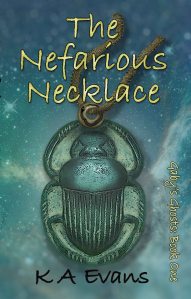 Ghosts are pesky things, and ten year old Gaby Brown would like to get rid of hers.

After Gaby touches an old necklace at her local museum, the menacing spirit of an ancient Egyptian girl named Kesi appears. The ghost wants something. And she wants it now! When Kesi threatens Gaby’s family, Gaby knows she must do something. But what? How can she stop a ghost? Gaby and her friend, Jacob, delve into Egypt’s past and realise there’s more to the necklace than they thought.

Can they unravel the clues and help Kesi before the ghost gets REALLY angry?

Gaby loved her room. It was the only place in the world that was her own. When she was younger, her parents had decorated it with pink paint and rag doll wallpaper, but as soon as she’d turned ten, they’d let her tear down the paper and repaint the walls. She’d chosen a light green shade with darker green fern and leaf patterns along the bottom. Together with her mom and dad, Gaby had also painted her bed frame and dresser white with big green leaves on them, so it felt like she was sleeping in a jungle. She looked at herself in the large oval mirror, then at the pictures tucked into the frame, of her father and the various digs he’d managed. Kissing her index finger, she placed it on the most recent photograph and went over to her bed.

Climbing in, Gaby picked up her e-reader and flipped though the loaded books, petting her cat, Carter, absentmindedly. Nothing caught her eye. She yawned and decided not to read tonight. Reaching over to her bedside table, she pulled the switch on her lamp and snuggled under the dinosaur print duvet, a reminder of the interest she’d shared with Jacob, if only for a short while.

Gaby stood before a long passage reaching deep inside the rock. She looked around but all she could see was the tunnel leading down into the stone hill. It was large and square, the ceiling towering over her. Taking a breath, Gaby took a step. Then another. Flaming torches placed every few feet along the wall lit the way. She cocked her head to the side. Had she heard something? Gaby concentrated. There! Someplace ahead of her she heard the faint sound of singing. And a flute, like the one the girl in her vision had been playing, only played much more expertly. Was the girl here? Had she gotten better on the instrument?

Drawn to the music, Gaby started walking down the passageway. After a few steps she realised the walls and ceiling of the tunnel were decorated. Coloured figures danced in the torchlight, each performing a task.

Gasping, Gaby realised what these drawings reminded her of. That mummy movie, the one she had mentioned to her uncle! The drawings on the tomb of the evil priest were just like these ones! Instead of being nervous, Gaby was intrigued. THAT was just a movie, and she knew movie stuff wasn’t real.

She kept walking, being careful as the passageway continued sloping downward. The singing and flute playing grew louder with each step she took, urging her forward. Glancing at the ceiling, her eyes widened at the painted stars that covered the space: bright gold five-pointed stars on a deep blue background. There were thousands of them, twinkling in the light as if outside in the sky.

As she continued Gaby passed small rooms that had been carved off the tunnel. She peered into one but the light from the passageway didn’t penetrate the darkness enough to see what, if anything, was in them. Staring into the darkness, Gaby shivered and backed away. The stars and figures on the walls that had delighted her only moments ago now seemed to close in around her.

Taking a deep breath, Gaby smelled the same spices she’d noticed in her vision. Warm and familiar, she took some consolation from the fact that here was something she recognised, something safe. Ignoring the feelings of claustrophobia, Gaby continued.

The singing was louder now, and while Gaby could make out different voices, she had no idea what those sounds meant. Were they words? The music was also louder, accompanying the singing, rising and falling with each note sung. The smell of spice grew stronger and the air more stifling. Gaby started taking deeper breaths as she approached the end of the passage. It seemed like her lungs couldn’t get enough air to satisfy them.

After a few more feet Gaby stepped out into a large cavern. Every wall and ceiling surface was covered with art and writing, the strange picture language her dad said were hieroglyphs. Enormous carvings of men and women, some with human heads, others with animal heads, adorned the walls, each painted with bright blues, greens, and yellows.

Suddenly the air around her grew thin. Gaby gulped and sucked in as hard as she could. It wasn’t enough. Gasping, she fell to one knee, her arm raised toward a wall for support. It wasn’t enough. She collapsed to the floor and rolled onto her back, staring up at the golden stars.

Gaby sat up in bed, still gasping for air, her hand waving around in the dark in front of her. Slowly she was able to take in small amounts of air until finally her breathing was back to normal, her lungs finally sated.

Swinging her legs over the side of her bed, she looked around. Moonlight shone into her window, as it did every clear night, illuminating her dresser and her bed and everything else in her room. She walked over to the window and peered out at the side of her house. There was the driveway, with her mom’s car parked in its usual spot. And the bins for garbage, the ones the raccoons always got into. Everything was as it should be.

Shaking her head, she climbed back into bed. It was a dream, right? Nothing more. Gaby had almost convinced herself of that as she fell back asleep. Almost.